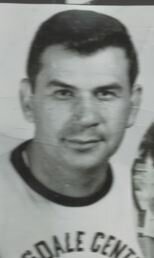 Please share a memory of Carl to include in a keepsake book for family and friends.
View Tribute Book
Carl P. Saglimben Allegany, NY Carl P. Saglimben, 89, passed away peacefully the morning of Sunday (January 22, 2023) in his home. Born May 12, 1933 in Dunkirk, he was the son of Dominic and Mary DiPasquale Saglimben. On January 5, 1957 at St. Bonaventure Church in Allegany he married the love of his life, Rosemary Butinski, who survives. Recently they were both blessed to celebrate their 66th wedding anniversary. Carl, known as ‘Coach’ or ‘Sag’ to most, graduated from Dunkirk High School in 1951. He went on to play college basketball at St. Bonaventure University from 1951-1955 where he was a standout player. In Sag’s senior year he led the team in rebounding, averaging 10 per game and was the team’s second leading scorer at 11.2 points per game. After graduating from St. Bonaventure, he enlisted in the US Army where he served from 1956 until his honorable discharge in 1958. During this time, he met his wife Rosie at the Burton Hotel in Allegany. Sag began his teaching career at Hinsdale Central School in 1958 as a physical education teacher, where he coached 7-man football, track, baseball, and basketball. He served as director of athletics, as well as supervising principal. He eventually was appointed to Superintendent of Schools in 1972, until his retirement in 1992. He loved Hinsdale Central School, its students, faculty and staff, the community, and Board of Education who supported him for 34 years. He had been forever most grateful to them. Sag’s basketball coaching career spanned from 1958 to 1972 where his teams won 198 games with only 84 losses. His teams captured 8 Cattaraugus County Class Championships, 9 Section VI playoff berths, and 1 Section VI final. He was also the first Olean Times Herald ‘Coach of the Year’ in 1968. He was tapped ‘Administrator of the Year’ in 1975, was inducted into the Hinsdale Central School Athletic Wall of Fame, the Big 30 Hall of Fame in 2017, and the Allegany County Athletics Association Hall of Fame in 2020. He was a long-standing member of the Olean Lions Club and served as president from 1980-1981. He was instrumental in forming and administering the former Allegany Limestone ‘Little Hoopers’ basketball program for grades 3-6. Additionally, he was the longtime scorekeeper for the St. Bonaventure men’s basketball team from the late 1960’s to the early 1980’s. His passion was spending time with his family, and especially his grandchildren. To them, he and their grandmother Rosie were known as Nani and Nanu (Italian for grandma and grandpa). Until his last breath, Nanu was passionate about the way you shoot the basketball, what you look at, and how you hold the ball. It’s a secret art to this day that most do not know. In addition to his wife Rosie of 66 years, he is survived by 4 children, Karen (Rich) Silloway of Olean, Mark (Patty) Saglimben of Allegany, Mike Saglimben of Allegany, and Brian (Gretchen) Saglimben of Langhorne, PA; grandchildren Lauren (Dean) Whitcomb, Dominic Saglimben, Brian Saglimben, Drew Saglimben, and Kyle Saglimben; a nephew Gary Granata; a niece Donna Snead, and a sister-in-law Joyce Butinski. He was predeceased by a sister, Natalie Granata. The family will be present to receive friends on Thursday from 3-7pm at the Casey, Halwig & Hartle Funeral Home, 3128 W. State Rd., Olean. A Mass of Christian Burial will be held Friday (January 27, 2023) at 10am in St. Bonaventure Church. Rev. Michael Reyes, OFM, pastor, will be the celebrant. Burial will follow in St. Bonaventure Cemetery. Military honors will be accorded at the church by the Allegany American Legion Ritual Team. Memorials, if desired, may be made to the Hinsdale Central School Alumni Association, 3701 Main St., Hinsdale, NY 14743.
Thursday
26
January

Share Your Memory of
Carl
Upload Your Memory View All Memories
Be the first to upload a memory!
Share A Memory
Send Flowers
Plant a Tree