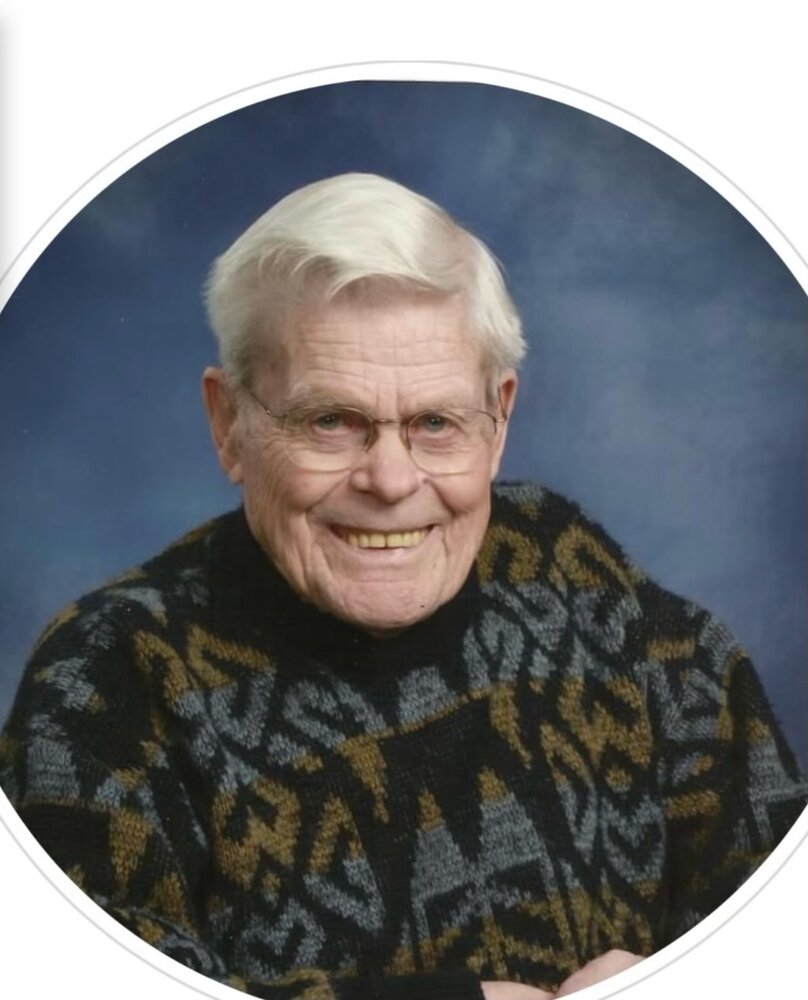 Please share a memory of George to include in a keepsake book for family and friends.
View Tribute Book
George J. Schreiber, Jr. Allegany, NY George J. Schreiber, Jr., 101, a longtime resident of Route 417 in Allegany, passed away peacefully on Tuesday (December 14, 2021) at The Pines Healthcare and Rehabilitation Center in Olean, with his children and their spouses by his side. Born October 9, 1920 in Olean, he was the son of the late George and Signe Tuveson Schreiber, Sr. On April 10, 1948 in Wyandotte, MI he married Eugenia E. “Jeanne” Freiberg who predeceased him August 23, 2007. Mr. Schreiber was a graduate of Alfred Tech College. He served with the U.S. Army in the European Theater of Operations during WWII as a technician corporal, including the Normandy Invasion. He operated a large poultry farm for many years on West State Rd. in Allegany before being employed by Eastern Microwave, Inc. of Syracuse, retiring in 1988. He was a member of St. John’s Lutheran Church in Allegany where he served as a Deacon. He and his wife were actively involved with the Junior Walther League when their children were young. He was a member, past commander and adjutant of the Allegany American Legion Charles Harbel Post 892. He also served on the Allegany School Board for many years and was a member of the Olean Barbershoppers. Surviving are a daughter Susan (Robert) Kalman of Allegany; a son George “Jake” (Caroline) Schreiber, III of Allegany; 4 grandsons Aaron Asis, Daniel Asis, George (Rachael) Schreiber, IV and Luke (Jessica) Schreiber; 2 granddaughters Emily (Ed Hill) Schreiber and Claire (Brem Stoner) Schreiber; 2 great grandsons; 6 great granddaughters and several nieces and nephews. In addition to his wife he was predeceased by a grandson Matthew Asis on May 2, 2019 and 2 sisters Bernice Latham and Florence Martiny. The family will receive friends on Monday (December 20, 2021) from 10am until 11am at the Casey, Halwig & Hartle Funeral Home, 3128 W. State Rd., Olean. Services will begin at 11am in the funeral home. Rev. Derek Cheek, pastor of St. John’s Lutheran Church in Allegany, will officiate. Burial will be in Allegany Cemetery, with full military honors being accorded by the Allegany American Legion Ritual Team. Flowers are gratefully declined. Memorials may be made to St. John’s Lutheran Church, 36 N. 4th St, Allegany, NY 14706, the Allegany American Legion Post 892, 4350 NY Rte 417, Allegany, NY 14706 or to the Cattaraugus County SPCA, 2944 Olean-Hinsdale Rd., Olean, NY 14760. Online condolences may be expressed at oleanfuneralhome.com.
Monday
20
December

Share Your Memory of
George
Upload Your Memory View All Memories
Be the first to upload a memory!
Share A Memory
Send Flowers
Plant a Tree