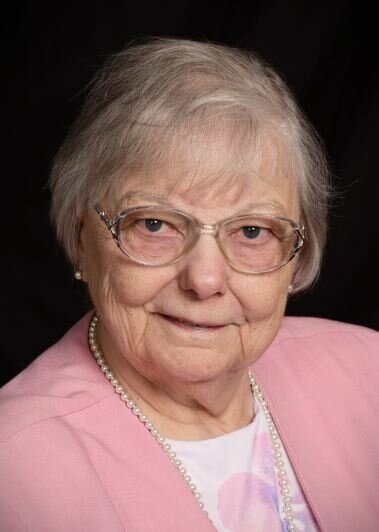 Please share a memory of Charlotte to include in a keepsake book for family and friends.
View Tribute Book
Charlotte Preston Duke Center, PA On January 2, 2023, Charlotte Horlbeck Preston was called home by her Lord and Savior Jesus Christ. Charlotte was born on January 25, 1930, in Jersey City, NJ. She was the daughter of Alfred and Gertrude (Schaarschmidt) Horlbeck. On June 11, 1955, she married the love of her life, Eugene Preston, in Ridgewood, NJ. Charlotte graduated from Ridgewood High School in Ridgewood, NJ, and worked for the Chase Bank in New York City before meeting her husband. After their marriage she worked for Ingersol Rand in Easton, PA, before her children were born. Charlotte was active as a leader in the Girl Scouts, 4H, her church Sunday school, and as a school and public library volunteer while raising her family. She moved to Allegany in 1974 with her husband, and worked as an executive and financial secretary – “chief cook and bottle washer,” she would say – for his energy engineering and design business, Amergy Corporation, in Olean, NY. She was a member of St. John’s Lutheran Church in Allegany for 48 years, where she was the church treasurer, member of church council, and middle school Sunday school teacher for much of that time. She was always careful in counting donations, but never counted the time she spent serving the church, so we do not know exactly how long she held those positions. Charlotte, along with her husband, also served for many years on the Board of Directors of the Cattaraugus Development Corporation. As a tribute to the years they both served, a fund was named in their honor - the “Gene & Charlotte Preston Elderly Housing Assistance Fund”. This fund assists elderly county residents who are at risk of losing their housing. Charlotte loved to sew. She made clothing for herself and family members, and especially enjoyed reusing fabrics to make quilts. She was a devoted fan of Jeopardy! and cozy TV mysteries like Murder She Wrote. She enjoyed reading all types of books and loved spending time with her grandchildren, great-grandchildren, and close friends. Charlotte is survived by her two children – Elizabeth “Lisa” (Alan) Ward of Cary, NC, and Edwin “Ed” A. (Polly) Preston of New London, PA; five grandchildren - Julia (Jake) Pessia, Tracy Preston, Grant Preston, Karen Ward, and Nick Kuhn; four great-grandchildren – Caleb Pessia, Ellie Pessia, Shelby Preston, and Emma Preston; one brother – Ralph Horlbeck; two sisters-in-law – Shirley (Winsheimer) Horlbeck and Emily (Preston) Kimball; and several nieces and nephews. She is predeceased by her husband, Eugene Preston, her parents, her sister Gertrude (Horlbeck) Hausmann, and a nephew, Clifford Thomasset. A Celebration of Life service is planned for 2:00 p.m. on Saturday, April 29, at St. John’s Lutheran Church, 36 N. 4th Street, Allegany, NY, 14706. In lieu of flowers, contributions may be made to the Memorial Fund at that address.
Print
Saturday
29
April