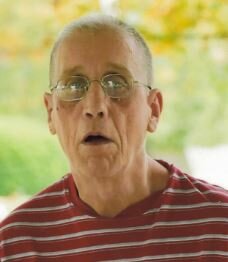 Please share a memory of Daniel to include in a keepsake book for family and friends.
View Tribute Book
Daniel J. Goodman Olean, NY – Daniel J. Goodman passed away Saturday (July 16, 2022) in his home after a long battle with cancer. Born June 17, 1950 in Salamanca, he was the son of William and Eileen Goodrich Goodman. Dan attended Bucktooth Run School and later attended St. Patrick’s Catholic School, both in Salamanca. In his younger years he would help on the farm and take care of the animals. For many years he was employed at Subcon Industries on a Whirley Contract working on various light assembly tasks. Dan would also attend the DayHab and Continuing Day Treatment programs. He later went on to work at Burger King which was a lifelong goal. In his free time, he enjoyed going out to eat, watching movies, and going to dances. Dan was an avid Buffalo Bills, Buffalo Sabres and New York Yankees fan. He was also a devout catholic and would attend the Basilica of St. Mary of the Angels. Surviving is a brother William Goodman of Salamanca, a stepbrother Richard Goodrich of Georgia, and several nieces and nephews. He will be sorely missed by his Intandem family and friends on the at Little 6th St. and West Fall Road. He was predeceased by a brother Thomas Goodman and a stepsister Susan Goodrich Neubauer. Friends are invited to attend a visitation Thursday (July 21, 2022) from 10 am to 11 am at the Casey, Halwig and Hartle Funeral Home, 3128 West State Road, Olean. A funeral service will begin at 11am. Burial will be next to his brother Tom in Calvary Cemetery, Salamanca. Memorials may be made to Intandem, 1439 Buffalo St., Olean, NY 14760. Online condolences may be expressed at oleanfuneralhome.com.
Print
Thursday
21
July