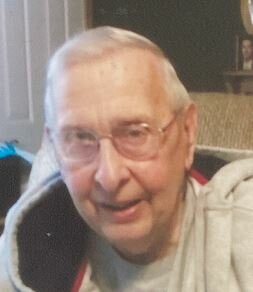 Please share a memory of Kenneth to include in a keepsake book for family and friends.
View Tribute Book
Kenneth J. Louser Allegany, NY Kenneth J. (Pete) Louser 80, of 1127 Richards Road, Allegany passed away Friday (July 15, 2022) at Buffalo Mercy Hospital. Born January 5, 1942 in Olean he was the son of George and Alice Spindler Louser. On September 2, 1966 he married Mary L. Ginter in St. Bonaventure Church who survives. Pete was a 1959 graduate of Allegany High School. He then enlisted in the US Navy where he served from 1959 until his honorable discharge in 1963. He worked as a heavy equipment operator for the International Union of Operating Engineers, Local 17A for over 30 years. He was an avid outdoorsman who dearly loved his family and his home. Surviving besides his wife of 55 years are two sons, Kevin (Karen) Louser of Shoreham, NY and Jeff (Amy) Louser of Allegany; five grandchildren, Jason, Joshua, Sara, Jeffrey (Hannalee) and Jenna; one sister Catherine Putt of Allegany, and several nieces and nephews. Also surviving are a sister-in-law Joan Matrone of Texas and three brothers-in-law, Francis Ginter of Allegany, George (Carol) Ginter of Tennessee, and Bill (Eileen Budaj) of Hinsdale. Pete was predeceased by a brother Thomas Louser, and two sisters-in-law Agnes Streckfus and Dawn Ginter. At Pete’s request there will be no visitation. Burial will be in St. Bonaventure Cemetery at the convenience of the family. Memorials may be made to the Allegany Engine Co., Inc. 186 W. Main Street, Allegany, NY 14706. Arrangements are under the direction of the Casey, Halwig &Hartle Funeral Home, Olean. Online condolences may be expressed at oleanfuneralhome.com.

Look inside to read what others have shared
Family and friends are coming together online to create a special keepsake. Every memory left on the online obituary will be automatically included in this book.
View Tribute Book
Services for Kenneth Louser
There are no events scheduled. You can still show your support by sending flowers directly to the family, or planting a memorial tree in memory of Kenneth Louser.
Visit the Tribute Store

Share Your Memory of
Kenneth
Upload Your Memory View All Memories
Be the first to upload a memory!
Share A Memory
Send Flowers
Plant a Tree