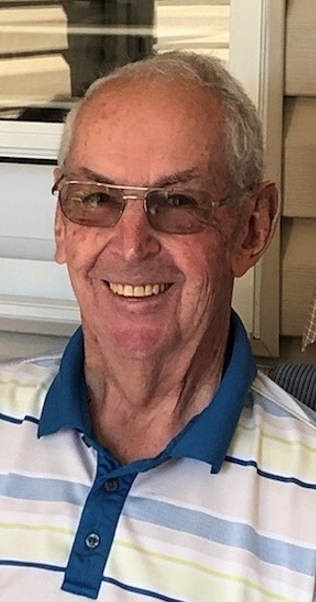 Please share a memory of Dick to include in a keepsake book for family and friends.
View Tribute Book
Richard Jandrew The Villages, FL. Richard Jandrew, a resident of The Villages and Allegany passed away Tuesday (June 7, 2022) at his home in The Villages. Born March 3, 1939 in Olean, he was the son of the late Robert and Leola Hanks Jandrew. When first diagnosed with terminal cancer, Dick voiced to his family that he felt he had lived a full blessed life. He found love twice and was fortunate to have had two wonderful families. He married his first wife of 38 years, Anna (Funk) Jandrew from Lamar, PA on June 24, 1962 until her death in 2000. Together, they raised two daughters, Mary Kay Jandrew, from The Villages, FL and Deanna (James) Jandrew-Wurtenberg from Penfield. They were blessed with two grandchildren Miranda and Anthony Indovina and one great-granddaughter Avery Flannigan. Upon Dick’s retirement, he wed Mary (Spindler) Stayer of Allegany on August 3, 2002 where he was welcomed into the Stayer family by Mary’s children, Robert (Katie) Stayer of Melstone, MT, Thomas (Vickie) Stayer of Allegany, Cinda (Gregg) Warner of Allegany, Mark Stayer of Fort Garland, CO and Rose (Greg) Ruffner of Allegany. Dick and Mary shared 19 years of marriage where both families blended their lives together. Dick was a graduate of Oswayo Valley High School. During Dick’s teenage and young adult years he worked on his grandfather’s family farm, which began Dick’s love and respect for the farming industry. He shared his knowledge of farming by working 29 years for Agway Inc. and in 1986 left Agway to purchase his own Agway store and renamed it Jandrew’s Farm and Garden Center in Allegany, until his retirement in 2002. Dick was a man of great faith. He attended St. Bonaventure Church and was a member of St. Vincent DePaul Church in The Villages. In retirement, Dick enjoyed being a “Snowbird” choosing to spend winters in sunny Florida. There Dick enjoyed playing golf several times a week with family and friends. During the summer months he was active with woodworking and keeping his home and lawn well maintained. Also surviving, are 2 sisters Gail (James) Cummings of The Villages, Fl and Nancy (David) Goodridge of Gainesville, GA; 2 brothers James (Ginny) Jandrew of St. Cloud, FL and Larry (Barb) Jandrew of Arden, NC and many nieces, nephews and step grandchildren. He was predeceased by two brothers Donald (Paula) Jandrew and David (Fran) Jandrew. The family is planning a memorial service to take place in Allegany at a later date. It will be announced in an upcoming edition of the Times Herald. Memorials, if desired may be made to Cornerstone Hospice, 4215 County Road 561, Tavares, Fl 32778 or to St Bonaventure Catholic Church, 95 East Main Street, Allegany, NY 14706. Arrangements are under the direction of the Casey, Halwig & Hartle Funeral Home, Olean. Online condolences may be expressed at oleanfuneralhome.com.

A Memorial Tree was planted for Dick
We are deeply sorry for your loss ~ the staff at Casey Halwig & Hartle Funeral Home
Join in honoring their life - plant a memorial tree
Services for Dick Jandrew
There are no events scheduled. You can still show your support by sending flowers directly to the family, or planting a memorial tree in memory of Dick Jandrew.
Visit the Tribute Store
Print
Online Memory & Photo Sharing Event
Online Event
About this Event