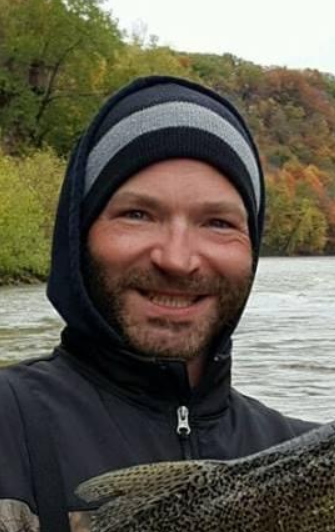 Please share a memory of Shane to include in a keepsake book for family and friends.
View Tribute Book
Shane Patrick Dugan Allegany, NY Shane Patrick Dugan, 44, of 43 Harriet St., passed away unexpectedly Sunday (March 6, 2022) of an apparent heart attack. Born February 19, 1978 in Kingston, PA, he was the son of Joseph “Jay” Dugan, Jr. and Maggie Stady. Shane was a 1996 graduate of Allegany Central School where he enjoyed playing varsity football. He later attended SUNY Canton and graduated, with honors in 2012 with a Bachelor of Technology degree, specializing in alternative and renewable energy systems. Protecting resources remained a permanent part of his psyche and locally he spent a lot of time cleaning waterways between the Allegheny River and Birch Run Ponds. He was a self-proclaimed “water champion.” He held many jobs and was often drawn to the ones that enabled him to travel and have new experiences. He first worked aboard a ship in Alaska and for 6 months spent much of that time at sea, harvesting and processing crab. He also traveled to different states, working at youth hostels for a period of time. He lived for a year in Sonoma County in northern California at a Buddhist community where he learned the art of bronze casting and the skills of heavy equipment operation while helping to construct a temple. Once he returned to the Allegany area, he perfected his art of drywall finishing for various contractors as well as other jobs for local companies. His lifelong passion included fishing where he enjoyed catching salmon, muskies and bass. Another favorite hobby, especially with his nephew, Ethan, was in collecting and restoring vintage as well as newer model BMX bikes. Camping and kayaking were also special hobbies for him which tied in nicely with his years of working at the boy scout camps for Allegheny Highlands Council. His more recent interests were panning gold, and metal detecting. Surviving besides his mother of Allegany are 8 brothers and sisters, Justin Walterich of Olean, Shawn (Tiffany) Dugan of Gilbert, AZ, Kellie (Jeremy) Baxter of Allegany, Kari (Nicholas) Faulkner of Allegany, Carl Walterich of Olean, Carleen (Matthew Dutton) Walterich of Lumberton, NC, Blaine Walterich of Olean and Bryce Walterich of Olean; 15 loving nieces and nephews, several aunts and uncles, and many cousins. He was predeceased by his father Jay in 2000. The family welcomes friends to a visitation at St. Bonaventure Church, 95 E. Main St., Allegany on Friday (March 11, 2022) from 10am until 11am. A funeral mass will begin at 11am in the church. Rev. James Vacco, OFM, pastor, will be the celebrant. Burial will be in St. Bonaventure Cemetery. The family requests that donations in memory of Shane be made to the fund to develop the Allegany River Skate Park, C/O Village of Allegany, 106 E. Main St., Allegany, NY 14706, or to a charity of the donor’s choice. Arrangements are under the direction of the Casey, Halwig & Hartle Funeral Home, Olean. Online condolences may be expressed at oleanfuneralhome.com.
Print
Friday
11
March