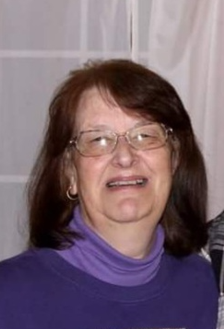 Obituary of Peggy A. Green

Please share a memory of Peggy to include in a keepsake book for family and friends.
View Tribute Book
Link to watch live stream of Funeral for Peggy: http://buffalomedia.net/03012022 Peggy A. Green “Loving wife, mother, grandmother and great-grandmother” Olean, NY Peggy A. Green, 70, of 215 S. 10th St., entered the arms of her loving Savior on Wednesday (February 23, 2022) at the Olean General Hospital, in the loving presence of her husband and granddaughter. Born June 26, 1951 in Olean, she was the daughter of Doris M. Ackley Wingard. She was first married to Fred Zoghibe with whom she had 2 daughters, Julie and Lisa. They later separated. On January 1, 1999 in Reynoldsville, PA she married Raymond Green who survives. Peggy graduated from Allegany High School and later from Olean Business Institute. She first worked at the former St. Francis Hospital. She then worked for 30 years for Cattaraugus County, finishing as a day care examiner for the Department of Social Services. She was an active member of Epic Church. She most enjoyed her role as wife, mother and grandmother, and the care she showed for the well-being of her extended loved ones made her a pillar of the family. Additionally, she loved gardening, caring for her pets, cooking, baking and going to camp with her husband, daughter and grandchildren. She leaves behind her husband Raymond; 2 daughters Julie (Eric) Nelson and Lisa Zoghibe Howard, both of Olean; 2 stepsons Benjamin (Yang) Green of Bern, Switzerland and Daniel Green of Eugene, OR; 1 stepdaughter Ryan Zoghibe of Tampa, FL; 5 grandchildren Kristyn Hayman, Tyler Howard, Jakob Howard, Brandon Hayman and Steven Hayman; 2 step-grandchildren Noah and Claire Green; twin great-grandchildren Hayden and Eloise Howard; several half siblings; numerous nieces, nephews and cousins; 3 sisters-in-law Margo Hanmer Landries of Weston Mills, Fredericka Green Fletcher of Raymond, PA and Diane Zoghibe Snyder of Olean and a brother-in-law Pastor James (Sherry) Green of Reynoldsville, PA. She was predeceased by her mother, and a brother Donald Landries. Friends will be received on Monday from 4-7pm at the Casey, Halwig & Hartle Funeral Home, 3128 W. State Rd., Olean. Visitation will continue Tuesday (March 1, 2022) from 10am until 11am at the funeral home, with a funeral service to begin at 11am. Rev. Chuck Maine, pastor of Epic Church in Olean, will officiate. A luncheon will be served at Epic Church following the service. Burial will be later in the day in Raymond Cemetery, Genesee, PA. Memorials may be made to Epic Church, 411 W. Henley St., Olean, NY 14760 or to the Mildred Milliman Radiation Medicine Center, 1415 Buffalo St., Olean, NY 14760. Online condolences may be expressed at oleanfuneralhome.com.
Monday
28
February

Share Your Memory of
Peggy
Upload Your Memory View All Memories
Be the first to upload a memory!
Share A Memory
Send Flowers
Plant a Tree