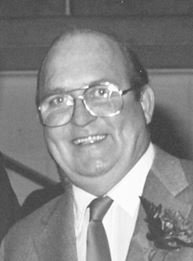 Olean, NY     Donald Francis ‘Don’ McLean passed peacefully in his sleep at Absolut Care in Allegany, NY on February 6, 2019 at the age of 90.

He is survived by his wife Priscilla (Pat), his children Brian, Gary, Kevin, Shawn, and Kathy, six grandchildren and six great-grandchildren.  To many sports fans in western New York and beyond, he found wide renown as the play-by-play announcer for St. Bonaventure basketball and became known as ‘The Voice of the Bonnies’.

He was born in Butler, Pennsylvania in January 1929, the sixth of seven children of John and Louise McLean.  His father, John ‘Jack’ McLean, was one of the pioneering voices in radio, spending almost his entire career in Buffalo with various radio stations.  Don’s interest in radio sprung from his father’s work as a radio news writer and broadcaster.

He joined the Marines at the end of WWII, enlisting too late to see any combat action.  After he was released from service, he attended Canisius College and, briefly, Miami University where he worked at a local radio station.  In 1949, while attending Canisius, he started to work part-time for WWOL in Buffalo, doing several types of shows, including news, interviews, and musical shows.

Having found his life’s work, he applied for and obtained a position in 1951 with WFCB in Dunkirk, NY.  His duties included gathering news, spinning records, and conducting remote broadcasts.  In the fall of the same year, he was employed by WBNY in Buffalo as a staff announcer.

In January 1952, a fellow radioman told him of a position as news editor at WHDL in Olean, NY.  In an interview in 1983 with the Bona Venture, he related, “He called me and told me there was an opening for news director at WHDL. I got the job but I only expected to stay there for six months.  I loved the area, though, and I met my future wife, Pat, so I decided to stay.”  They were introduced to each other by Ivers J. Norton, School 10 principal and weekend announcer, and married a year later at St. Mary’s of the Angels church.

In December 1956, he took over as the announcer for St. Bonaventure basketball.  The Bonnies had had two losing seasons, but he told then-coach Eddie Donovan that since both were Irish, they should have enough luck between them to make the post-season.  The Bonnies did that year and for many years after that.  This was the beginning of a long relationship:  he did not miss a basketball game for any reason, including illness or travel, for over thirty years from December 1956 to January 1988, a span of 899 games.  A few years after he retired his broadcast microphone, he was honored for his service by being inducted into the St. Bonaventure Hall Of Fame.

At WHDL, he served as News Director, Program Director, General Manager, and was on the Board of Directors.  For his service in the community, he was awarded the Olean Council of Knights of Columbus Merit Plaque.  The Student Senate of St. Bonaventure awarded him their “Golden Mike” for excellence in sports broadcasting.  He was a charter member of the Western New York Sports Broadcasting Association, serving as Vice President 1958-59.  He also received the first annual Fred Forness Award of Loyalty and Devotion to the community of Olean in 1962.

After he signed off the air, he founded McLean Communications, a company specializing in video presentations.  He was also elected to the Cattaraugus County legislature and served one term.

Memorials may be made to Cattaraugus County Meals on Wheels, 1 Leo Moss Drive, Olean, NY 14760.

Arrangements are under the direction of the Casey, Halwig & Hartle Funeral Home, Olean.  Online condolences may be expressed at oleanfuneralhome.com.

Services for Donald McLean
There are no events scheduled. You can still show your support by sending flowers directly to the family, or planting a memorial tree in memory of Donald McLean.
Visit the Tribute Store

Share Your Memory of
Donald
Upload Your Memory View All Memories
Be the first to upload a memory!
Share A Memory
Send Flowers