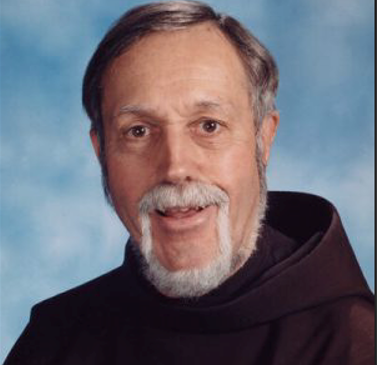 Please share a memory of Rev. Neil to include in a keepsake book for family and friends.
View Tribute Book
Rev. Neil J. O’Connell, OFM St. Bonaventure, NY Rev. Neil J. O’Connell, OFM, 84, former President of St. Bonaventure University, died Thursday evening (March 24, 2022) at the nursing care unit of St. Elizabeth Motherhouse in Allegany, where he had resided for the past several years. He was a professed Franciscan friar for 63 years and a priest for 58 years. The son of Cornelius J. and Marie K. (Schneider) O’Connell, Fr. Neil was born in Buffalo, N.Y., on May 21, 1937. His father was a Buffalo city firefighter and his mother a schoolteacher. He was raised in South Buffalo, attending Buffalo public schools 72 & 67 and Bishop Timon High School, graduating in 1955. Drawn to the life of the Franciscan friars who staffed Timon, he attended St. Joseph Seraphic Seminary in Callicoon, NY from 1955-57. He entered the Order of Friars Minor as a novice at St. Raphael Friary, in Lafayette, NJ on July 14, 1957, receiving the religious name Neil James O’Connell, OFM. He would be known professionally and socially by this name for the rest of his life. He made his first profession of vows as a Franciscan in 1958 and was educated at the seminaries of the Order: St. Francis College, Rye Beach, NH, a school of St. Bonaventure University, from which he received a B.A. in philosophy in 1960; and Holy Name College in Washington, D.C., receiving a S.T.B. from the Catholic University of America in 1964. He was ordained to the priesthood at the Franciscan Monastery, Washington, D.C. Feb. 22, 1964. After a pastoral internship at St. Anthony Shrine in Boston, Mass. from 1964-65, he began teaching at St. Francis College in Rye Beach, NH in 1965. He had begun work on his M.A. in history at Siena College in Loudonville, NY in summer school while working on his theological degree, completing this in 1967. In 1967, he continued graduate studies in history at the University of Georgia, receiving the Ph.D. in 1970. During his years in Athens, Ga., he also ministered at the Catholic campus ministry there. After a year teaching at Prairie View A & M University in Prairie View, TX, in 1972 Fr. Neil joined the history department of Fisk University in Nashville, TN, eventually becoming associate professor, chair of the history department, and Director of Humanities and Fine Arts. He also ministered to students in the Catholic campus ministry center there and at Meharry Medical College in Nashville. In 1980, he returned to Buffalo as professor and Dean at SUNY Erie Community College’s downtown campus. During these years, he also served as adjunct associate professor at Christ the King Seminary in East Aurora. In 1986, he became professor and Dean at Elizabeth Seton College in Yonkers, NY, which merged with Iona College in 1989. In 1990, Fr. Neil was appointed President of St. Bonaventure University, serving until 1993. After leaving St. Bonaventure, Fr. Neil served in a number of pastoral ministries in New York City while continuing to teach part-time at various colleges and universities. He served first as pastor of St. Stephen of Hungary Parish in New York from 1993 to 2002 while teaching as adjunct professor at Marymount-Manhattan College, Bronx, N.Y. He then served as administrator of All Saints Parish in Harlem from 2002-2008, while an adjunct professor at Lehman College in New York. He then resided at St. Joseph of the Holy Family Parish in Harlem from 2008-2016, while continuing as adjunct at Lehman College and campus minister at Lehman and Borough of Manhattan Community College until 2014. In 2016, Fr. Neil retired from active ministry at St. Anthony Friary in St. Petersburg, Fla., until returning to Western New York, moving to the healthcare facility at St. Elizabeth Motherhouse in Allegany in 2019. Over the years, Fr. Neil was active in a wide variety of academic, religious, and community organizations. Academically, his research interests were broad and wide-ranging, extending from Tudor-Stuart England to contemporary American racism. He devoted much attention to the work of the African-American community in the Catholic Church and the activities of the National Association for the Advancement of Colored People. He was also active in a wide variety of civic and community organizations, such as the YMCA, Big Brothers/Big Sisters and the Rotary Club. In New York City he was a longtime member of the board of CREATE, Inc., a community organization focusing on outreach and drug rehabilitation programs for youth in Harlem begun by fellow Franciscan, Benedict Taylor, OFM. He is survived by his sister-in-law, Mary Ann Kennedy O’Connell, of Williamsville, N.Y.; a niece, Rosemary O’Connell Shmavonian; and nephews Patrick, Matthew, Mark, Joseph, Brian, and Brendan O’Connell, and their families. Fr. Neil was predeceased by his parents and a sister, Rosemary O’Connell in childhood, and a brother, Dr. Cornelius J. O’Connor, Jr. in 1988. A wake will begin at 9am on Saturday (April 2, 2022) at the St. Bonaventure University Chapel. A eulogy will be delivered at 10:40am, followed by a funeral Mass at 11am in the chapel. A luncheon in Doyle dining hall will follow the mass, with cremation and burial to take place in St. Bonaventure Cemetery at a later date. Arrangements are under the direction of the Casey, Halwig & Hartle Funeral Home, Olean. Online condolences may be expressed at oleanfuneralhome.com.
Saturday
2
April