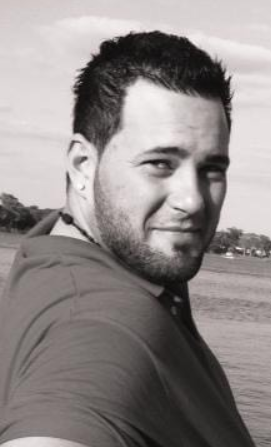 Please share a memory of Evan to include in a keepsake book for family and friends.
View Tribute Book
Arthur Evan Laverty Rochester, NY Arthur Evan Laverty, of Rochester, was called home to the Lord late Christmas Eve shortly after arrival at the Olean General Hospital, due to sudden cardiac arrest. Evan came into this world July 9, 1986 and was proud to have been born in Sarasota, Fl, a State that held a special place in his heart, and where he soon planned to move back to. He was the son of Bruce J. and Carole C. Forney Laverty. He was a 2004 graduate of Archbishop Walsh High School where he loved playing basketball and Big 30 Football. He moved to the Rochester area where he worked the past 15 years as a supervisor for MWI Carbon and Graphite in Henrietta. Evan enjoyed many passions, including a lifelong love of classic cars. He owned many of them including Chevrolet Caprices, various Chrysler models, and Cadillacs. He was also an avid Buffalo Bills fan where, at a young age, he constructed a crude but functional “Bills Fort” in his parents’ back yard. He eventually made his family garage into a new and much-improved “Fort” where several TV’s, couches, stereo equipment, and other creature comforts made Bills and St. Bonaventure Bonnies game days the place to be. He enjoyed the company of others and in many ways made others who were less fortunate in life feel valued. He would also help others financially even when he had little to give himself. He enjoyed hobbies such as fishing, cutting hair, listening to music, and ministering to people he thought were the “underdog,” often people he didn’t even know. He leaves behind his loving parents Bruce and Carole Laverty of Olean; 6 siblings Danielle Laverty of Naples, FL, Elana J. (Damon Leone) Laverty of Orlando, FL, James E. Chatman of Cuba, Shawn D. Chatman of Boca Raton, FL, Matthew W. Kirkwood of Olean and Bobbi L. Kirkwood of Olean; a nephew Xavier Laverty of Olean whom he loved like a son, and many loving aunts, uncles and cousins, including a special aunt, Sister Mary Helen Forney, SSJ of Erie, PA. He treasured the relationship with his many foster brothers and sisters, especially his foster brother George Leaf who predeceased him. Family and friends are invited to attend a Celebration of Life service on Thursday (December 30, 2021) at 11am at Creekside Chapel, 2523 Five Mile Rd, Allegany. Rev. Adam Stein, pastor, will officiate. Burial will be at the convenience of the family. “Christ shall be magnified in my body, whether it be by life or by death.” –Philippians 1:20b Arrangements are under the direction of the Casey, Halwig & Hartle Funeral Home, Olean. Online condolences may be expressed at oleanfuneralhome.com.
Thursday
30
December