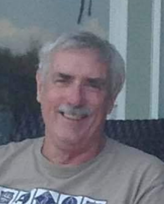 Please share a memory of Thomas to include in a keepsake book for family and friends.
View Tribute Book
Thomas R. “Bones” Bryant Seminole, FL Thomas R. “Bones” Bryant, 72, of Seminole, and a former lifelong resident of Olean, passed away Monday (November 22, 2021) at Morton Plant Hospital in Clearwater, Fl, after a recent illness. Born August 18, 1949 in Olean, he was the son of Shirley L. and Vernell L. Carter Bryant. On June 3, 1972 in Olean he married Barbara J. Ellison who survives. Tom was a graduate of Olean High School and later Alfred State College in 1969. He enlisted in the US Navy in 1970 and served aboard the U.S.S. Wasp. He was honorably discharged in 1974 and served in the US Naval Reserves until 1976. He began working at McGraw Edison Co. in Olean and worked as an electrical engineer, retiring after 35 years of employment. Tom was an active member of the Olean Elk’s Lodge #491 for many years and more recently with the Elk’s Club in Seminole. He enjoyed the social aspect of his membership where, along with his wife Barb, he enjoyed the company of friends. He also formerly belonged to the Hinsdale American Legion and currently was a member of the American Legion in Seminole. He enjoyed hunting as a younger man, and he liked to rebuild Gravely tractors. Surviving are his wife Barbara; 2 daughters Connie (Jeff) Heath of Cramerton, NC and Amy (Mike) Randolph of Portville; 4 grandchildren Ryan Heath, Joseph Heath, Zakary Linza and Hailey Randolph; 1 sister Linda Spencer of Olean and several nieces and nephews. He was awaiting the birth of his first great grandchild. In addition to his parents, he was predeceased by a sister Barbara Barton of Allegany. The family will be present to receive friends on Monday from 4-7pm at the Casey, Halwig & Hartle Funeral Home, 3128 W. State Rd., Olean. A funeral service will immediately follow at 7pm, beginning with a flag presentation by the American Legion. Memorials, if desired, may be made to the Hinsdale American Legion, 3727 Route 16, Hinsdale, NY 14743. Online condolences may be expressed at oleanfuneralhome.com.
Monday
29
November