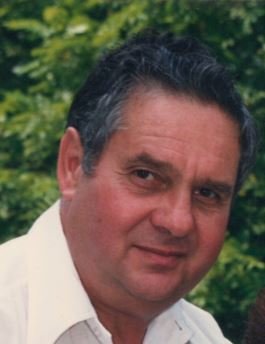 Joe was born November 30, 1929 in Allegany and was the son of Angelo and Celestina Mollica Crisafulli.  On September 25, 1954 at St. Joseph's Church in Olean he married Joan L. Housey who survives.

Joe was a lifelong resident of Allegany, attended Allegany schools, and served in the US Army while stationed in Germany during the Korean War.  He was also a devout catholic who had a very deep faith in his religion.  He was a life-long parishioner of St. Bonaventure Church in Allegany.

He was first employed by the former K-Bar Cutlery and later Clark Bros. Co. before beginning in the construction business.  He worked for the Edstrom Construction Co. and later worked for Crisafulli Construction along with his brothers Lawrence and John.  He also co-owned and operated the Canada Dry Distributorship along with his brother Lawrence.  He later established Joe Crisafulli and Son Construction where he worked until his retirement.  His son continues his legacy with quality craftsmanship learned from his father.

Joe loved gardening, enjoyed and took pride in lawn care, was an avid bowler, was a lifelong member of the American Legion, and was an honorary member of the 4th Degree Knights of Columbus, Olean Assembly for many years.  Joe always wanted to make sure his friends and loved ones were happy.

Friends will be received on Wednesday from 4-7pm at the Casey, Halwig & Hartle Funeral Home, 3128 W. State Rd. Olean.  Funeral services will be held Thursday (November 14, 2019) beginning with a prayer service at 9:30am in the funeral home, followed by a Mass of Christian Burial at 10am at the Basilica of St. Mary of the Angels.

In lieu of flowers, memorials may be made to St. Bonaventure Church or to the Alzheimer's Association of WNY, 6215 Sheridan Dr. Suite 100, Buffalo, NY 14221 .  Online condolences may be expressed at oleanfuneralhome.com.

Services for Joseph Crisafulli
There are no events scheduled. You can still show your support by sending flowers directly to the family, or planting a memorial tree in memory of Joseph Crisafulli .
Visit the Tribute Store
Share A Memory
Send Flowers