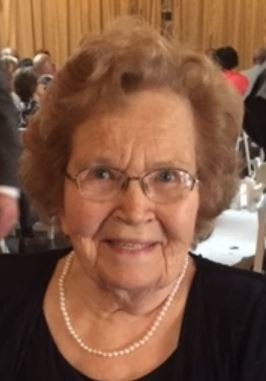 Pauline T. Miller
Knapp Creek, NY      Pauline T. Miller, formerly of Knapp Creek., entered into eternal rest on Saturday (June 22, 2019) in the loving presence of family and caregivers at her son John’s home. Shortly after the death of her husband in 2016, she had left their home since 1949, in Knapp Creek, to live with John and his wife Carole.  Carole passed away in March, in Allegany.
The former Pauline Onalee Taylor was born on December 7, 1927 in Coleville, Pennsylvania, the daughter of Perry B. Taylor and the former Margaret Mae Webster.
She began her education at Ceres (PA) grade school. Then, after her family’s move to Riterville, PA in 1937, she followed her new neighbor Andrew D. "Don" Miller to the first day of school at the MJ Ryan School in nearby Lafayette. This began a relationship that lasted until his death on November 2, 2016, after 68 years of marriage. She then graduated with high honors from Bradford Area High School in 1944, and as an RN from the Bradford Hospital School of Nursing in 1947.
Pauline corresponded with her future husband throughout his service in Europe in the U.S. Army Air Corps during World War II. They were married at St. Bernard of Clairvaux Catholic Church in Bradford on May 21, 1948.
After raising their seven children, Pauline returned to school and earned an Associate Degree in Accounting and Business Administration at Olean Business Institute in 1982. For many years she was the bookkeeper and tax preparer for Miller Oil Company, her husband’s independent oil production business. She also was the accountant and office manager for many years for the podiatry practice of her son, Dr. John Miller.
Pauline was a member of the Third Order of St. Francis, the Lady Knights (Knights of Columbus) of Allegany, the Desk & Derrick Association, the Fireside Pumpers of Bradford, the Pennsylvania Independent Petroleum Producers Association, and the Penn-York Oil and Gas Association. With her husband, she received the Sucker Rod Award of the Pennsylvania Independent Petroleum Producers Association in 2014 in recognition of their many years of service to the small, independent oil and gas operators of Pennsylvania.
She was a parishioner of the Basilica of St. Mary of the Angels in Olean. Pauline had been a long-time parishioner, church organist, and member of the Altar and Rosary Society of Sacred Heart Church in Knapp Creek and, together with her husband for many years, coordinated the annual parish pledge drive for Catholic Charities of the Diocese of Buffalo. They were awarded the St. Joseph the Worker Award in 1981 by the Diocese for their Catholic Charities efforts. She also later served as the organist for the former St. John the Baptist Church in Vandalia.  Pauline was also active for many years in the Parent’s Association of Archbishop Walsh High School. She and her husband were long-time supporters of St. Bonaventure basketball and have held season tickets since their days of sitting at floor level in the Olean Armory, beginning in the early 1950s.
Great appreciation is expressed to her caregivers since 2015, especially Ms. Jackie Morgan, who has provided great care and respect to both Pauline and her late husband, whose love is appreciated by the entire family.
Much loved by her family, Pauline is survived by her daughter, Mary (Craig) Valine, of Windsor, CO; and her 6 sons, Thomas A. (Pat) Miller of Rock City, Michael J. (Debbie) Miller of Kingsport, TN, Mark A. (Judy) Miller of Mount Kisco, John P. Miller and Christopher P. (Sandy) Miller, both of Allegany and Peter R. (Bonnie) Miller of Fairport, 16 grandchildren, 13 great-grandchildren, her sister-in-law and nearly life-long friend, Mary Lou Rich of Kane, PA, and many nieces and nephews.
In addition to her husband she was pre-deceased by her parents, a sister, Marjorie Meyer, a brother, Richard Taylor and a daughter-in-law Carole Miller.
Friends will be received on Friday from 2-4 & 6-8pm at the Casey, Halwig & Hartle Funeral Home, 3128 W. State Rd. Olean. Funeral services will be held Saturday (June 29, 2019) beginning with a prayer service at noon in the funeral home, followed by a Mass of Christian Burial at 12:30pm at the Basilica of St. Mary of the Angels. Rev. Patrick Melfi, pastor, will be the principal celebrant. Burial will be in St. Bonaventure Cemetery.
Memorials, if desired, may be made to St. Mary of the Angels Church, Catholic Charities of the Diocese of Buffalo, St. Vincent DePaul Society, Knapp Creek Volunteer Fire Department, Penn Brad Oil Museum, or to Southern Tier Wounded Warrior Benefit (c/o Dr. John Miller, 2646 West State St., Olean, NY 14760).
Online condolences may be expressed at oleanfuneralhome.com.

Services for Pauline Miller
There are no events scheduled. You can still show your support by sending flowers directly to the family, or planting a memorial tree in memory of Pauline Miller.
Visit the Tribute Store
Share A Memory
Send Flowers