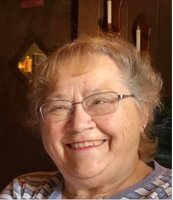 Mary Ann Taylor Allegany, NY Mary Ann Taylor, 75, of 1468 Chipmonk Rd. passed away unexpectedly Saturday (July 18, 2020) at the Olean General Hospital, following a recent surgical procedure. Born October 17, 1945 in Olean, she was the daughter of Scott and Ada Jean Conrad Stevenson. On July 5, 1969 at the former First Presbyterian Church in Allegany she married Richard A. Taylor who passed away October 18, 2004. Mary Ann was a graduate of Allegany Central School and then received her cosmetology degree from the Continental School of Beauty. She had been employed as a hairdresser for 45 years, the last 30 of which she operated Mary Ann's Beauty Salon on Main Street in Allegany prior to her retirement. She had been a very active member of the First Presbyterian Church in Allegany prior to its closing. She also was a member of the Allegany American Legion Auxiliary and the Limestone Volunteer Fire Club. She was formerly active with the Lydia Brands chapter of the Order of the Eastern Star. Her passion was her family, and she especially loved and enjoyed helping take care of her grandchildren. She is survived by a son Scott (Erica) Taylor of Bradford, PA; 4 grandchildren Karisma, MacKenzie, Oliver and Amelia; 1 brother Scott Stevenson of Limestone and several nieces and nephews. In addition to her husband she was predeceased by a daughter Renee Taylor in 2008; a brother John Stevenson and a sister Connie Stevenson. Friends will be received on Monday and Tuesday from 4-7pm at the Casey, Halwig & Hartle Funeral Home, 3128 W. State Rd. Olean. Funeral services will be held Wednesday (July 22, 2020) at 11am in the funeral home. Burial will be in Limestone Cemetery. Memorials, if desired, may be made to a charity of the donor's choice. Online condolences may be expressed at oleanfuneralhome.com. Anyone visiting the funeral home for visitation and/or the funeral must wear a mask.