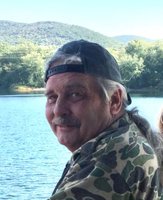 Charles A. "Chuck" Benjamin Bradford, PA Charles A. "Chuck" Benjamin of 2 Bushnell St. passed away unexpectedly Tuesday (May 26, 2020) at the Bradford Regional Medical Center after a short illness. Born August 15, 1960 in Southampton, NY he was the son of Harold A. Benjamin and Carol A. Armusewicz Benjamin. Chuck enlisted in the US Navy after attending high school and was a hull technician. He developed his welding skills and worked in that profession in the various places he lived. He also helped his father in the oil fields. He loved fishing and camping and was very good at mechanical work, especially on cars and motorcycles. He also was a good scrap metal collector as well as an avid NASCAR and Pittsburgh Steelers fan. Surviving are his mother of Aberdeen, MD; his father of Anita, PA; 3 children Christopher A. Benjamin of Warren, PA, Shauna M. Benjamin of Buffalo and Justin A. Benjamin of Smethport, PA; 4 grandchildren; 5 siblings Steven Benjamin of Olean, NY, Elaine Benjamin of Jacksonville, NC, Janice (Manpreet) Singh of Edgewood, MD, Michelle Coletti of Texas and Barbie Jo (David) Bard of Erie, PA and several nieces and nephews. Due to the current COVID-19 situation, visitation is required to be private. Burial will be at the convenience of the family. Arrangements are under the direction of the Casey, Halwig & Hartle Funeral Home, Olean. Online condolences may be expressed at oleanfuneralhome.com