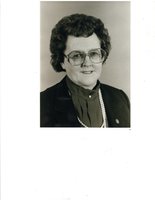 C. Janet Potter Halladay "Loving, devoted wife, mother, grandmother and great-grandmother" Great Valley, NY C. Janet Potter Halladay, 89, entered into the arms of her loving Savior on Thursday (May 14, 2020). She had recently moved to Norton, MA to live near her daughter Lorraine. Born July 10, 1930 in Humphrey, she was the daughter of Vernon and Leora Fay Potter. On Friday, February 13, 1948 in Humphrey she married her husband of 72 years, Philip Wells Halladay, who survives. Janet attended the Humphrey 1-room school, the Great Valley High School, and graduated from Ellicottville Central School in June 1948. She worked for the County of Cattaraugus, which included 20 years with the Department of Motor Vehicles, retiring in December of 1991. From 1991 to 2003 she worked in respite care. From 1959 to 1968 she worked door to door sales for the Watkins Co. Janet was devoted to her God and church and was first a member of the Humphrey Baptist Church and later the Allegany Baptist Church in Allegany. She had been a Sunday School teacher, a leader in Children's Ministries, and was an integral part of the Ladies Missionary Society. She also enjoyed music ministry and sang solos and duets. She had been named "Woman of the Year" for the Cattaraugus County Women's Republican Club in 1997 and also served as its president. She also supported the Humphrey Volunteer Fire Department. Her hobbies included collecting Beanie Babies, setting up her annual Christmas Village display, and traveling and participating in the annual Humphrey Blueberry Day. She was a frugal garage-saler and bargain hunter and also was an avid photographer. She will most be remembered as being loving and devoted to her family. She hosted all the family celebrations, including her siblings, cousins, nieces and nephews. She routinely made the fact of her being a "lefty" a part of the family conversation. Also, her favorite number was "13", as it had a special meaning to her for important dates in her life. Family and friends will also remember her encouragement to others through her thoughtful cards, phone calls and prayers. Surviving besides her husband are her 5 children Janice Law of Stafford, VA, Allen (Linda) Halladay of Humphrey, Jim (Grace) Halladay of Lewisberry, PA, Judson Halladay of Cumming, GA and Lorraine (Rev. Jeffrey) Bailey of Attleboro, MA; 14 grandchildren; 21 great-grandchildren; 2 sisters-in-law June (Leneal) Potter and Cec (Wesley) Potter and several nieces, nephews and cousins. She was predeceased by her parents and 3 brothers Wesley Potter, Donald Potter and Leneal Potter. Due to the current COVID-19 quarantine mandates, only a graveside service will acknowledge her final resting place at the Allegany Protestant Cemetery. It will be attended by immediate family only on Thursday (May 21, 2020). Rev. Jeffrey R. Bailey, son-in-law, will be presenting the eulogy. In lieu of flowers, the family requests her memory be honored with gifts to the Allegany Baptist Church, 3236 Maple Ave, Allegany, NY 14706 or to the Humphrey Volunteer Fire Department, 4591 Humphrey Rd, Great Valley, NY 14741 . To send a condolence to her husband Philip, it may be addressed C/O Lorraine Bailey, 5 Sheridan Circle, Attleboro, MA 02703. Arrangements are under the direction of the Casey, Halwig & Hartle Funeral Home, Olean. Online condolences may be expressed at oleanfuneralhome.com.