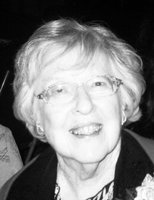 ALLEGANY, NY - Celestine M. Welch, of Allegany, passed peacefully (May 13, 2020), at the Pines Healthcare and Rehabilitation Center in Olean. She was 99 years old. Born April 6, 1921, in Corydon, PA, she was the daughter of James "Shine" and Romaine Griffin McLaughlin. On December 27, 1947 in St. Bonaventure Church she married Chester P. Welch who predeceased her April 10, 1993. When she was very young, her family moved to Allegany where she grew up. She attended St. Bonaventure Parochial School and then graduated from the former St. Elizabeth’s Academy in Allegany. She attended St. Bonaventure College (University), and later transferred to Elmira College to help care for a family relative who lived there. She graduated with a BA degree in History and Education. She then went on to do graduate work at St. Bonaventure and Cornell Universities. Celestine started her teaching career in Mt. Morris, NY, teaching high school history. She then took a position at Gainesville (NY) Central School. When word of the bombing at Pearl Harbor was announced, she and another young teacher looked at each other and said, “Where is Pearl Harbor?” They then proceeded to the library and used a world globe to locate it. While at Gainesville she was asked to coach the boys’ basketball team because most young men at that time were enlisted in the war. She knew nothing about basketball, but her father’s reputation as a coach at St. Bonaventure University was enough for the principal to give her the job. Her good nature led her to agree. She took on a second job after school in a food processing plant to help with the war effort. She found it funny that some of her high school students she taught during the day were now her foremen, overseeing her work at the plant. After the war she continued her teaching career in Cattaraugus and Hinsdale, eventually retiring from Allegany Central School in 1983, after many years of service to area young adults. Her students remember her as “hands down the kindest human being they ever met.” Celestine lost her father, James, when she was only twelve years old during the Great Depression. This tragedy changed her life and bonded her relationship with her three sisters, Geraldine, Elizabeth, and Anne who did everything they could to support their mother. When sister Anne left the area during the 1960’s to live in Florida, Celestine and Elizabeth would pile their kids in their cars and drive each spring to visit her. Geraldine would accompany them to keep the peace. Birthdays and holidays were always a family affair that created fond memories for all the cousins throughout the years. She and her sisters were all supportive parts of their respective Catholic communities, always quick to donate food, baked goods, and their time for many causes. She was proud of her Irish heritage and whenever near a piano would play Notre Dame’s “Fighting Irish” song, entertaining her grandchildren. Along with her husband, she supported many sporting events of her children and grandchildren through the years, cheering them from the sidelines. She loved food, and whenever she shared her experiences about a trip or vacation, the first thing she would mention was the food! She was an avid reader of mystery novels when she was not caring for her 5 children or working. She was a member of St. Bonaventure Church, Delta Kappa Gamma, Chapter Beta Epsilon, a professional society of women educators, Catholic Daughters of America, and the Lady Knights of Columbus. She is survived by her five children: Jean Davis of Allegany, James (Sandra) Welch of Hinsdale, Celeste (Mark) Taber of Madison, WI, Frederick (Kathryn) Welch of Olean, and Thomas (Bonita) Welch of Charleston, SC. She was the most loving mother-in-law to Sandi, Mark, Kathy, and Bonnie. She was a proud grandma to twelve grandchildren, Michael (Gina) Brady, Shane (Erin) Davis, Tasha White, Derrick (Heather) Welch, Christina Sitton, Aaron (Felipe)Taber, Kate Russell, Kristen (Hastings) Blumer, Kara (David) Richardson, Kevin (Katie) Welch, Kyle (Lindsay) Welch, and Ryan (Cassie) Welch. She was also blessed with twelve great grandchildren and one on the way. Also surviving is her loving sister Mary Elizabeth Eaton of Allegany and a sister-in-law Viola Christensen of Naperville, IL. She will be missed by her nieces and nephews and her absence will be felt at future family reunions. In addition to her parents and her husband, she was predeceased by 2 sisters, Geraldine McLaughlin and Anne Kane, and sister-in-law Marcella Jones. Due to COVID-19 restrictions, a private family viewing and Mass will be held at Saint Bonaventure Church in Allegany. Rev. James Vacco, OFM, pastor, will be the celebrant. She will be laid to rest in Saint Bonaventure Cemetery next to her husband. The family extends a very special and heartfelt thank you to the staff at The Pines for taking such good care of their mother. In lieu of flowers, memorials may be made to the Allegany Area Historical Association P.O. Box 162, Allegany, NY 14706 or to St. Elizabeth Mission Society 115 E Main St, Allegany, NY 14706. Arrangements are under the direction of the Casey, Halwig & Hartle Funeral Home, Olean. Online condolences may be expressed at oleanfuneralhome.com.